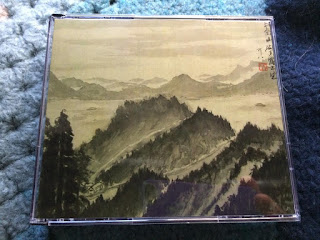 Third of three physical releases from France's Ushinawareta Tamashi, a relatively young HNW project that deeply impressed me with its huge, meditative, bass-heavy drone noise walls.  Very much in the vein of Naughty and Eugene Critchley, UT has a defined aesthetic and a colossal sound.
"Utsukushi Fukei" features four massive walls, giant slabs of meditative gorgeousness and drift that will absolutely pull you under.  This album is a masterwork by a very exciting new voice in the HNW world.
The album can be streamed in its entirety here:

Packaged in an oversized quadruple disc jewel case and released in a limited edition of 10 unnumbered copies.  $20 ppd. in the United States, $36 rest of world.

ORDER HERE: www.altarofwasterecords.storenvy.com
Posted by Author at 9:11 AM