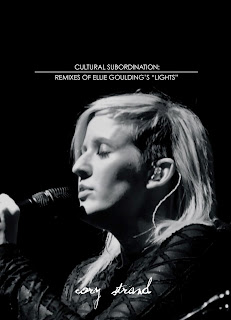 A reissue of my long out of print "Cultural Subordination" set, now with completely new artwork/layouts and a wealth of extra material.  I don't normally reissue things but enough people have asked about this one that i felt it was warranted.  The new disc is  a gigantic 70 minute composition that runs the gamut of styles found on the first two discs, from belligerent and sludged out wall noise to overblown remixology to desperate and trembling ambient textures.  Ellie Goulding's "Lights" is now rendered into something resembling a supernova of audio terror!
Packaged in a DVD case in a limited edition of 10 hand-numbered copies.  $18 ppd. in the United States, $30 rest of world.

ORDER HERE: www.altarofwasterecords.storenvy.com
Posted by Author at 7:07 AM