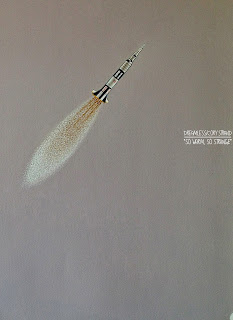 A totally meta split between my band Dreamless and my work in the HNW genre, with both artists working off the same source material, blurring the lines between what my projects are actually about.  Or maybe just defining them more properly into a larger body of work.  Either way it's ridiculous fun to do this sort of thing.  Dreamless turns in a hyper-destructive cover of Cat Power's classic track "Rockets," transforming Ms. Marshall's 4 minute existential query into a blistering 30 minutes of waaaaay overblown, stupidly heavy noise rock.  If I could get away with making the next proper Dreamless album sound like this I would, but I suspect it might be a little more lo-fi than most people are comfortable with.  I think it sounds fucking awesome.
Cory Strand's piece takes the same Cat Power track and transforms it into a 30 minute assault on the senses, with no respite once the gail force distortion kicks in.  Full on and total immersion in the sludgy devastation.  What was once gentle and dark becomes sheer punishment.  Rockets have been known to explode.
Packaged in a DVD case with two covers, in a limited edition of 15 hand-numbered copies.  $10 ppd. in the United States, $22 rest of world.

ORDER HERE: www.altarofwasterecords.storenvy.com
Posted by Author at 10:42 AM