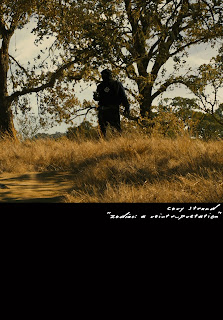 As devout followers of the label know, I was at one time a criminology major, obsessed with serial murder and aberrant psychology in general, and few cases found the two more closely intertwined than San Francisco's "Zodiac" murders in the late sixties and early seventies.  Robert Graysmith wrote two excellent books about the case (both highly recommended by me) and in 2007 David Fincher released his cinematic interpretation of them in his masterful film "Zodiac" (which easily stands as one of my favorite films of all time).
In working with the source material I have tried to echo what I feel to be the diseased headspace of the case as a cultural phenomenon, moving beyond simple psychological motivations into a piece of history writ large and bizarre.  Those motivations are still explored here but there is a quest for something larger in this material that I haven't attempted thus far in my soundtrack reconstructions, a sense of true and blinding disgust, a distorted throb of numbing anger and rage at imagined slights, rejections, and the torture of sexual inadequacy and unrequited love.  I feel this is one of the strongest sets I have ever released in every regard.  This one's a fucking destroyer and your speakers are going to be in agony.  Thanks to Roger Batty for suggesting I work with this material.
Packaged in a twin volume DVD case in a limited edition of 5 hand-numbered copies.  $30 ppd. in the United States, $42 rest of world.