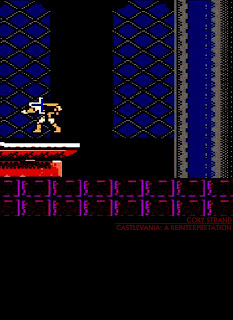 8-bit HNW terrorscultping using the soundtrack to Konami's classic NES game "Castlevania" as source.  Inspired by Auris Apothecary's tape releases of classic NES soundtracks, I decided to take a personal favorite and transform it into a darkened whorl of feedback holocausting.  I actually still play "Castlevania" pretty regularly (it's a great game to just zone out on when I'm listening to music) and all the frustrations and difficulties I remember from playing it when I was younger are still there.  It was not a simple game by any means, in either its gameplay or narrative ambition, and the soundtrack truly ranks as one of the NES system's best.  Lest you think this set is simply an exorcism of nostalghic feelings, I can assure you this is some of the more brutal wall noise I've created in a while.  Dead and hollow, like so many of Europe's transformed denizens that Simon Belmont runs across in his quest to eradicate the vampire Dracula.
Packaged in a DVD case with glorious 8-bit artwork, in a limited edition of 5 hand-numbered copies.  $15 ppd. in the United States, $27 rest of world.

ORDER HERE: www.altarofwasterecords.storenvy.com
Posted by Author at 6:09 AM