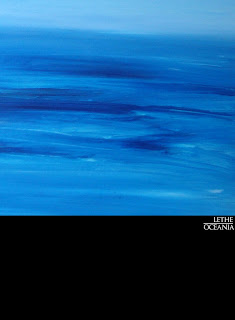 The second Lethe full length, previously available digitally, now properly issued.  A continuance of the approach found on "Alleline," "Oceania" sees the tones becoming more difficult and less soothing, with an emphasis on high end stagnant scree coupled with throbbing dollops of bass goop.  Meant to evoke the nightmarish expanse of the ocean, the album paints a vivid picture of the unconscious mind drifting ever further down, slowly trying to ward off the ever increasing pressures of the deep until the body finally collapses in on itself in an explosive pustulent mess of guts and cloudy blood, a ghost of the physical form now become free.  The cracks are impossibly deep down there, and no one knows where they lead.
Packaged in a DVD case in a limited edition of 10 hand-numbered copies.  $10 ppd. in the United States, $22 rest of world.