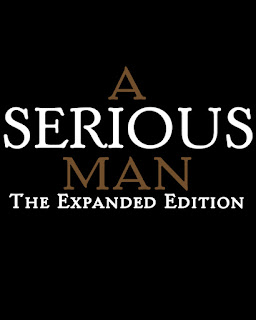 When i satrted doing large format sets based on individual films earlier this year, I knew I wanted to go back and revisit Joel and Ethan Coen's A Serious Man.  It is easily one of my very favorite films ever, as well as the work which i feel best defines the Coens' thematic obsessions.  It also features incredibly beautiful cinematography from the untouchable Roger Deakins and a haunting, elegiacal score from Carter Burwell.
My original rework of the score was a bit "reigned in" and I wanted to create something meditative and expansive this time out, as well as adding some audio that reflected the violence lurking in the subtext of the film.  "A Serious Man: The Expanded Edition" contains:

As usual with these "prestige" sets, it's packaged as 15 separate albums, each in their own DVD case utilizing my favorite images from the film (I did my own screen grabs for this one.)  It's a thing of menace and beauty, and I am very proud of it.  Here's my original write up of the first rework, from 2013:

"The Coen Brothers are easily placed amongst my favorite filmmakers.  Their ability to interweave total absurdity, nihilism, and extreme violence into their films without sacrificing the rich and deeply poetic philosophical inquiries at their heart is nothing short of masterful.  Alongside No Country For Old Men and The Man Who Wasn't There, A Serious Man explores the bizarre interconnectedness of the universe and mankind's growing realization that nothing ultimately matters, and moreso than either of the above mentioned works, A Serious Man attempts to take philosophy itself to task for its failure to provide any sort of feasible answers to life's perplexities and complications.  The ridiculous equation Larry Gopnik attempts to explain to his bewildered students may as well be a map of the universe as a whole, vast and full of complexities, myriad roads and paths all leading nowhere.  Existence is vacuous, devoid, a glacial collapse of meaning.
I wanted to work with Carter Burwell's score because it so beautifully articulates the themes of the film: the repetitious and cyclical nature of being, the failure to find meaning in any action, and the ethereal and haunting beauty of the mysteries we entwine ourselves in throughout our meandering lives.  There is no noise here, only a calm and inquisitive stagnant stillness, and maybe even a sliver of beauty peaking through the cracks."

ORDER HERE: www.altarofwasterecords.storenvy.com
Posted by Author at 10:43 AM