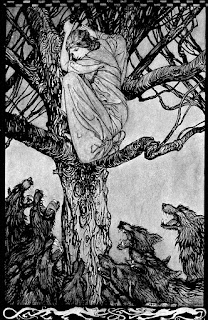 This was a Fantome De Sang full-length completed around the same time as my double CD release for Occult Supremacy Productions, "Une Obscurite Vampirique Dans Les Etoiles," with some additional production work completed in 2015.  As it was recorded and written during the same period as "Une Obscurite..." its sound is very similar: raw, chaotic, thrashy/punky occultish black metal approximations choked with atmosphere, a mixture of live instrumentation and computer processing.  Scathing noise and obliterating drum patterns dedicated to deep winter nights in the forest and the relentless hunger of wolves.
Released as a C44, noble silver cassettes.  Artwork by Arthur Rackham.  Released in a limited edition of 5 hand-numbered copies.  $10 ppd. in the United States, $23 rest of world.

ORDER HERE: www.altarofwasterecords.storenvy.com
Posted by Author at 6:10 AM