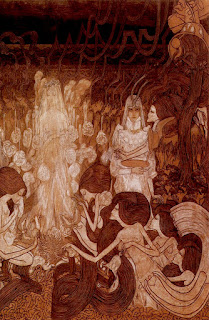 The most recent Fantome De Sang full length, completed summer 2015 and originally released as part of DeathSex Electronics' four-way "Baudelaire" split.  Since that release was incredibly limited and available only via trade with the label, I have decided to make the Fantome De Sang portion available as stand-alone album.  I am very proud of this work; it represents the culmination of virtually everything of done with the project, hearkening back to the very first releases of the project's formless blackened noise as well as touching on the current incarnation, with blistering drum patterns and live instrumentation.  This is probably the densest, most layered FDS release I've created; the process of making this record wiped me out pretty completely.  It is true sonic overload, with tons of shit going in every track.  It deserves to be heard by the project's fans.
Released as a C60, noble matte black cassettes.  Artwork by Jan Toorop.  Released in a limited edition of 5 hand-numbered copies.  $10 ppd. in the United States, $23 rest of world.

ORDER HERE: www.altarofwasterecords.storenvy.com
Posted by Author at 6:11 AM