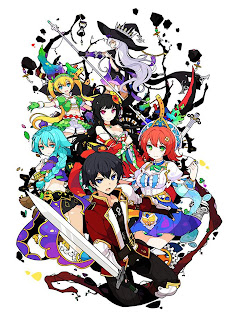 Sophomore AOW release for Echolaliac, returning with an epic new set of beautifully varied and richly textured HNW compositions crafted from the soundtrack to the visual novel game "Stella Glow."  With 15 compositions spanning three lengthy discs, Echolaliac demonstrates the same penchant for textural variety and exploration that made the debut album "Symphonic Rain" so arresting and mesmerizing.  There is an astonishing range of sound on display here, from crushing HNW assaults to queasy electro-throbbing disortion sludgewaves to distant and cold shivering HNW/ANW hybrids.  An intricately and methodically composed work of dense complexity.  Very happy to be releasing this one!
The record can be streamed in its entirety here:

Anyone who purchases the physical album through AOW can redeem a digital version of the record from the artist.  This version includes a second version of the entire album, with the OST samples edited.  Instructions for redemption will be sent along via AOW with purchase of the physical.
Packaged in a triple DVD case with gorgeously colorful artwork.  Released in a limited edition of 10 hand-numbered copies.  $20 ppd. in the United States, $36 rest of world.