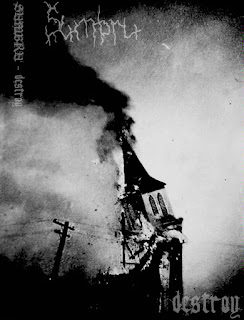 New full-length cassette from Sumbru, a project from the ever-creative Julien Skrobek.  Though a relatively new project, Sumbru has already turned in some absolutely devastating HNW masterworks (including the epic "Afterlife Signals," one of my fave releases from 2016) that showcase a more aggressive and crushing approach than some of Julien's other active projects.   "Destroy" does exactly what its title suggests: utter and complete HNW terror.  Across two massive and yawning walls of unrelenting thickness and bassy fuzzed-out distortion, Sumbru channels a certain sort of black metal aestheticism in regards to the violent qualities of the walls.  This is wallmaking at some its most brutal, simple, and focused.  Totally primal and caustic.
Released in a limited edition of 10 hand-numbered copies.  $10 ppd. in the United States, $26 rest of world.