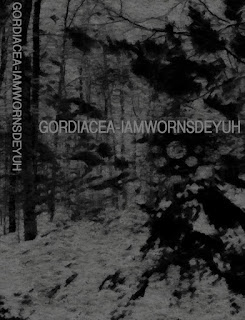 Very pleased to be releasing the debut cassette from Gordiacea, a new project that traffics in deep, throbbing, and suffocatingly engulfing bass-laded HNW.  "IAMWORNSDEYUH" is an incredible cassette, with its three walls each giving themselves over to crushing assaults of bass-driven fuzz and cold, distant textural distortions.  Disturbingly empty and hypnotizing, a sort of black hole of dense and cavernous ambience driven to a roar.  From time to time, higher pitched sounds emerge from the density, asserting themselves in desperate cries before sinking back into the bottomless audio muck.  A beautiful layering of sounds.  Truly symphonic in its textures.
The album can be streamed in its entirety here:

Released in a limited edition of 10 hand-numbered copies.  $10 ppd. in the United States, $26 rest of world.