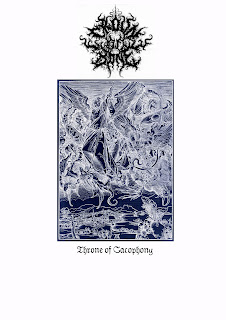 Crown Of Bone needs little introduction.  Across myriad releases, Dustin Alan Redington has sculpted out a severe and punishing sonic monument to agony, immolation, and the totality of immersion.  The haunting bleakness of existentialism has rarely been given such a formidable auditory heft, with Crown Of Bone summoning up echoes of primal Mayhem, Deicide, and dISEMBOWELMENT without sacrificing any of the scathingly caustic assemblies that mark Redington's highly original approach to HNW.  To say this belongs in any genre is fairly illusory (and ineffective) as it so obviously transcends the idea of genre as the best artists do; "Throne of Cacophony" is instead a grand guignol of extremity with nods towards vintage black, death, and doom metal and roots firmly in HNW and power electronics.
This is simply one of the most intense releases Altar Of Waste has put out, and I am honored to birth it to the world.  Listening to "Throne of Cacophony" is like being gutted from the inside out, blood flayed from flesh and bone burnt down to ash, leaving little left other than a murking husk awash in its own weakness slathering across the floor.  This is pure audio destruction.  The vocals here are insane, screams from the digital void that seem to come from somewhere far beyond our knowledge of dimensionality, communications from the purgatorical despondency that cradles the universe.  Crown Of Bone deliver true psychic scars that no amount of time can ever hope to heal.
Packaged in a DVD case in a limited edition of 50 hand-numbered copies.  $10 ppd. in the United States, $18 rest of world.