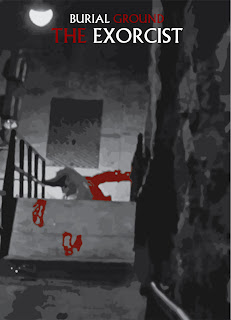 Altar Of Waste's second collaboration with Burial Ground pays tribute to one of the finest, most layered, and seethingly intense horror films of all time, William Friedkin's "The Exorcist."  While much of the terror of the film fittingly lies with Reagan's possession by Satanic forces and the abuses they inflict on her body, an equal amount of tension is generated through the psychological punishments endured by Father Karras and Father Merrin as they attempt to drive the ancient beings from the young girl's brutalized physical form.  "The Exorcist" succeeds as a film because it doesn't shy away from the fragility of the person, even when blanketed under the supposed protection of God's rites and emblems; we are always vulnerable to forces unbeknownst to us as well as our own psychological infirmities.  Burial Ground's work here is simply masterful, mirroring the complexity of the film through a variety of wavering tones and frequencies that evoke the lurking horrors in the shadows of our world.
Altar Of Waste is very pleased to release this newest piece from one of HNW's most intense and defined projects.  Packaged in a DVD case with stark and minimalist artwork by Gina Newman, in a limited edition of 20 hand-numbered copies.  $10 ppd. in the United States, $18 rest of world.