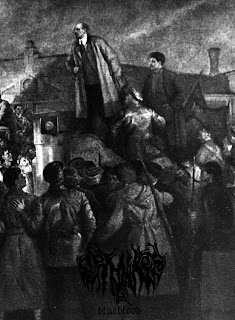 The causticity of modernity saps our collective being, rotting us from the inside out.  Royalty is exalted, hoisting their flags in a nod and desire towards neo-feudalism.  Existence is diseased.  Connections are fallacy.  The world is rife with illusions, obstinate reminders that suffocate transcendent thought and reinforce ideals of compliance and timidity.  Earthenwomb's "Blueblood" is a crossing of the wires, a garbled interception of radicalism broadcast from somewhere deep within the halls of oppression built up around us.  Crumbling walls of static cascade out, the brutality of live electricity reaching out to the soporific masses.  How long has it been this way?  Escape lies in immersion, the immolation total of an archaic design.
Altar Of Waste is pleased to release this dense and layered piece of sonic scathing, a reinterpretation of the shoegaze ideal of distortion saturation rendered into a nearly hour long squall of elegiac sorrow.  "Blueblood" also includes a reissue of "That Rotting Ambition, That Extinguished Hope," an equally destructive album-length work originally released by Glossolalia in 2011.  Wash yourself in the horror of the now.  Packaged in a DVD case with two different covers, in a limited edition of 20 hand-numbered copies.  $15 ppd. in the United States, $23 rest of world.