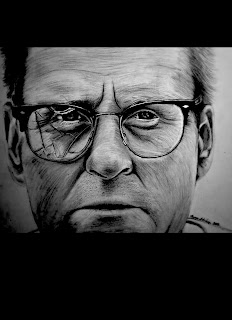 Lengthy rework of the soundtrack to one of my very favorite films, Joel Schumacher's Falling Down.  I saw this back in 1993 when it originally was released and it's been a fave ever since; having just written a paper on it for school, I feel its lost none of its incendiary or melancholic power.  As poignant an examination of the enervating, withering effects of capitalist modernity as can be offered, Falling Down serves as a bitter warning against unfettered social and economic "progress," and as a perfect diagnosis of the crippling malaise that permeates the very nature of being in the world.  As Freud wrote in Civilization and its Discontents, "reality is untenable,"; regressing into neurotic behaviors offers one of the only salves against life's unending difficulty.
The soundtrack to Falling Down is a masterful exercise in tense and ominous drones by James Newton Howard; in working with his score I have sought to preserve that tension and elongate it.  The rework is 10 discs of the score in drone mode, with an HNW "totality" recording of the film's audio track to finish it off.
Packaged in 11 separate DVD cases, utilizing imagery from and ephemera associated with the film.  Released in a limited edition of 5 hand-numbered copies.  $100 ppd. in the United States, $113 rest of world.

ORDER HERE: www.altarofwasterecords.storenvy.com
Posted by Author at 4:50 AM