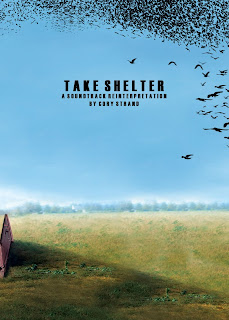 A large-scale rework of David Wingo's haunting, beautiful score to Jeff Nichols' masterful film Take Shelter.  I'm not going to write much about the film here because I don't want to spoil anything for those who haven't seen it-i'll simply say it deals with matters of epistemology and the perception of mental illness, has breathtaking cinematography, and features an absolutely incredible performance by Michael Shannon.
I've been toying with this rework on and off for two years now.  Much of Wingo's score for the film is made up of very short pieces, many of which are based on simple sine waves, making for difficult transformations.  My rework also traffics in shorter, EP-length pieces (each disc being between 7-23 minutes), featuring extended deep-bass drones and lush, enveloping ambience, best experienced through headphones.  It certainly belongs to the category of my "lovelier" works, suffused with a tiredness and sadness and sense of doom that echo the feelings of the film.
Packaged in an oversize DVD case and released in a limited edition of 5 hand-numbered copies.  $60 ppd. in the United States, $76 rest of world.