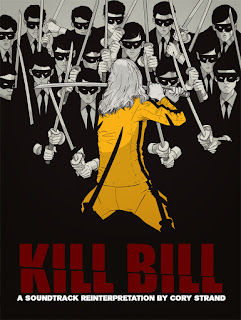 Another massive set exploring a single film's soundtrack in intense and expansive detail, this time for Quentin Tarantino's formally experimental masterpiece Kill Bill.  This rework is all HNW and noise this time out: no ambient diversions, no melancholy drones, no shoegazey atmospheres (except for the double disc "workprint" pieces included).  It's all harsh, it's all loud, and it's all NOISE.  Super chaotic bursts of highly psychedelicized noise, the sort of shit i was making about two years ago (as of late my noise work has been intentionally monotonous and tonally dense-this record is far from that!)  I can't think of a better way to reimagine such an absurdly violent, beautiful, daring, and nihilistic film.
The set consists of the soundtrack reworked noise style across 23 discs, a very special double CD of the "workprint" ambient textures made by me (from which i created the noise pieces) and two HNW "Totality" recordings of the film's audio track, each on their own DVD-R (divided as the film is, into Volumes I and II.)  Each disc is packaged in a single DVD case (except the "workprint" set, housed in a double DVD case) with unique artwork utilizing images from and ephemera associated with the film.  This is one of the most gonzo sets I've done-it's insane!
Released in a limited edition of 5 hand-numbered copies.  $225 ppd. in the United States, $238 rest of world.

ORDER HERE: www.altarofwasterecords.storenvy.com
Posted by Author at 10:51 AM