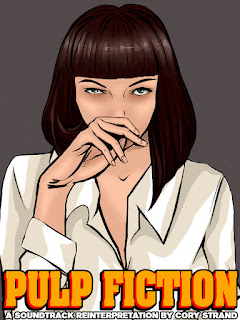 Another Tarantino soundtrack rework, this time for the brilliant Pulp Fiction.  Do I need to tell anyone about this film?  It changed everything circa the mid-90's and was very much one of a handful of films that got me thinking seriously about film as an artistic medium (my parents rented this for me in 1995, knowing i'd enjoy the violence and the labyrinthine nature of the plot-they know me so well!)  Even if you hate Quentin T. (and lots of people do, for various reasons), there's no way to downplay this film's status as a stone-cold fucking masterpiece.
My rework of the equally famous soundtrack shucks away most of the violence and goes straight to the film's cold, nihilistic heart, an unforgiving excursion into frigid, empty death ambient textures.  Eighteen discs of big, monotonous DRONES-there's a stagnant beauty to them that I didn't expect, and as usual in my work, a sense of yearning.
In addition to the soundtrack reworked in ambient mode across 18 discs, there's also an HNW "Totality" recording of the film's audio track, just for good violent measure.  Each disc is housed in its own single DVD case with its own unique artwork, culled from the film's imagery and associated ephemera.
Released in a limited edition of 5 hand-numbered copies.  $175 ppd. in the United States, $188 rest of world.

ORDER HERE: www.altarofwasterecords.storenvy.com
Posted by Author at 10:58 AM