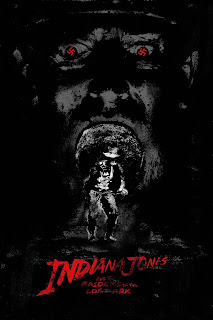 Pure, joyous nostalgiah on this one.  Being in my mid-thirties, I was the perfect age to fall under the spell of Steven Spielberg's "Indiana Jones" series; i remember seeing the films in the theaters with my parents and today the films still hold a special place in my heart.  While my personal favorite film in the series is The Last Crusade, it's obvious that, from a purely cinematic/theoretical perspective, Raiders of the Lost Ark is the best film.  I'm not going to say too much more other than this one is just meant to be fun, and that for some reason, John Williams scores make AWESOME drone and HNW.
This set contains some of both: some hugely empty ambient drones (they're huge and sound more like ANW made out of windstorms) and some crushing, assaulting HNW horror.  Adventure never sounded so...adventurous.
As always with these "prestige" film reworks, each of the 14 discs is housed in its own DVD case, with unique artwork culled from the film's imagery.  Also included is an HNW "Totality" recording of the film's audio track, also packaged in its own DVD case.
Released in a limited edition of 5 hand-numbered copies.  $110 ppd. in the United States, $123 rest of world.