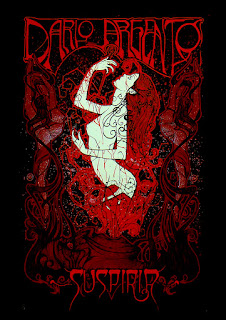 First volume of a two-volume rework set dedicated to perhaps the most stylish horror film of all-time, Dario Argento's masterpiece Suspiria.  Goblin's score for the film is equally famous; i've wanted to work with this film/score for years, but have always felt intimidated by the sanctity of the film and the music.  I feel this rework set aptly pays tribute to both.
Volume One is the ambient/drone version of the score rework, done in my recent "prestige" style.  And as you'd expect, these are some deep, heady ominous drones.  Also included with this set is an HNW "Totality" recording of the entire film's audio track.
Packaged as a 10 disc set, with each disc housed in its own DVD case with unique artwork using images from and ephemera associated with the film.  Released in a limited edition of 5 hand-numbered copies.  $75 ppd. in the United States, $88 rest of world.

ORDER HERE: www.altarofwasterecords.storenvy.com
Posted by Author at 6:27 AM