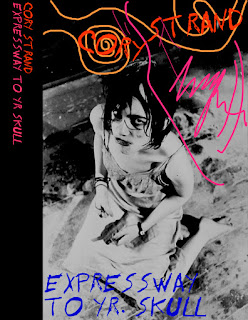 Third of my new SY reworks, this time working with one of my fave SY tracks (although i always work with my fave tracks, so i don't know why i'm really qualifying this statement), "Expressway To Yr. Skull," off of "EVOL."  Rather than use the album version, though, i decided to use the slightly more dangerous and unhinged live version of the track that the band performs on the 1991: The Year Punk Broke documentary.  These two walls are essentially just VERY deep and thick drones.  Heavy shit, man.
Released in a limited edition of 5 hand-numbered copies.  $8 ppd. in the United States, $24 rest of world.

ORDER HERE: www.altarofwasterecords.storenvy.com
Posted by Author at 9:52 AM