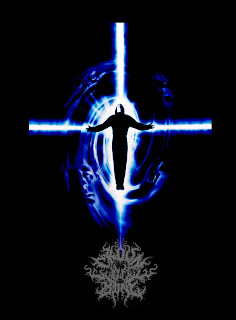 The third film tribute I've had the pleasure of releasing from the mighty Crown Of Bone, this time in honor of Clive Barker's woefully undersung nightmare noir masterpiece "Lord Of Illusions."  Whereas Crown Of Bone's last two releases with Altar Of Waste have seen the project exploring more textured, screamingly psychedelic, melodic, and expansive approaches to soundtrack revisionism, "Lord Of Illusions" is a total return to scalding HNW primitivism, with Dustin turning in some of his more severe material in honor of Barker's tale of occultic magic and blood ritual.  This record absolutely shreds at your speakers, with masses of distortion and bass textures intricately layered against one another for maximum auditory devastation.  Crown Of Bone's work here reflects the growing sense of detachment from the real that Barker's film so evocatively depicts; as the screaming noise destructionism grows ever more volatile, you begin to recede into the depths of your own mind and float away on the ethereal raft of the possibility entire.  If that isn't a mission statement for HNW then Altar Of Waste has no purpose whatsoever.  Another triumph from one of modern noise's most skilled practitioners.
Altar Of Waste is beyond pleased to unleash this devastating tribute to one of horror's absolute masters.  Crown Of Bone's tribute to "Nightbreed" will follow in the future!  Packaged in a DVD case in a limited edition of 15 hand-numbered copies.  $10 ppd. in the United States, $22 rest of world.