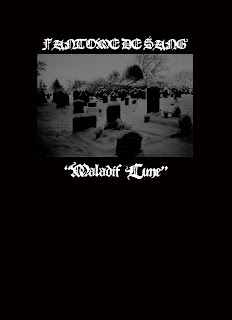 Scathing and knifelike screaming blackened wall noise and diseased moon ambient from this new and mysterious entity.  Deeply influenced by Les Legions Noire and the primitive spirit of feral French black metal, Fantome de Sang revel in a royal elitism hearkening back to the early aristocratic attitudes found in the work of the early French masters.  Here the romantic and tortured sanguine melancholy of Mutiilation and Vlad Tepes meets the occultic melodies and atmosphere of Moevot, resulting in a sound that is both breathtakingly violent and chaotically composed.  A masterful examination of black metal aesthetics as filtered through a modernist HNW approach.  Vampiric sorrows and cosmic laments create a wretched expanse of aggressive sonics and hymns to a sickly moon.
Altar Of Waste is pleased to unleash this epic summoning of unlight.  Deep forest and ensepulchred terror from the darkest reaches of black metal's storied ideology, Fantome de Sang have unveiled a masterwork of moonlight sacrifice.  The earth will choke on the spilled blood.
Packaged in a DVD case in a limited edition of 10 hand-numbered copies.  $20 ppd. in the United States, $32 rest of world.