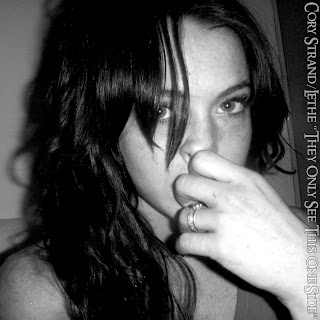 A collection of recordings I was preparing for the album that ultimately became "Three Pieces For Lindsay" (recently released on Occult Supremacy Productions), "They Only See This One Side" serves as sort of an unrealized proto-version of what that album might have been had I decided to stay with the chosen source material (Lindsay's song "Rumors") rather than create my own, as I ended up doing.  This release falls pretty squarely in the noise category, although it does have its prettier and more desolate moments as well (though even those have a sort of ANW feel to them.)  The Lethe piece was created especially for this release as a sort of comment on the work I've done with Miss Lohan as well as an indication of the direction I'm proceeding in with Lethe, a massive empty drone crafted out of one of Lindsay's statements before a judge regarding her missed rehab appointments.  All in all, 73 minutes of alternate universe starlet obsession.
In keeping with the "experimental" nature of this particular recording I have opted not to release it on AOW but present it instead as its own entity, packaged quite differently than usual.  Released in an edition of 5 copies, unnumbered, in a handmade digipack with paste-on covers and artwork.  $8 ppd. in the United States, $20 rest of world.