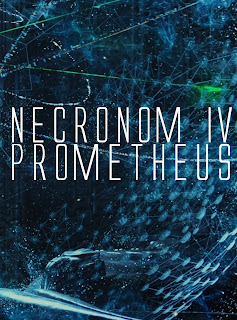 The follow up to "From Malice, From Nothingness" finds Necronom IV still exploring the mythology of Ridley Scott's Prometheus, this time trading the cold and infinite echoes of space for the nightmare tone baths of pure claustrophobia and the numbing growth of the void.  The four pieces found on "Prometheus" show the project reaching back to its inception, awash in the majesty of stagnation and eternity, with glacially unfolding waves of sound that seem to neither change nor evolve but instead simply exist, oozing towards an end they are utterly indifferent to.  The illusion of intellectualization and the human capacity for curiousity will become folly, welcoming the embrace of death and the ultimate nullification of self-conception.  Everything is a construct, an architecture of imprisonment that stretches across the breadth of a universe.  Take no comfort and tremble in fear.
Altar Of Waste is pleased to release this continuing engagement with one of science fiction's most malleable and well-mapped out mythological spaces.  All you will find is darkness.  Packaged in a DVD case and released in a limited edition of 5 hand-numbered copies.  $20 ppd. in the United States, $32 rest of world.

ORDER HERE: www.altarofwasterecords.storenvy.com
Posted by Author at 6:19 AM