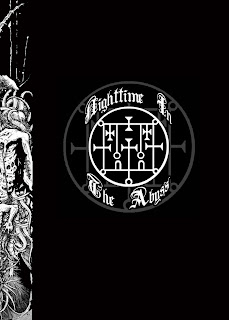 An unnerving new recording from Satanic nether-entity Nighttime In The Abyss, a horrific grand guignol that treads all manner of sonic ground from death ambient to blackened drone, from scathing PE entropy to heavenly choirlike ululations offered up to a bitter and empty sky.  Nighttime In The Abyss is rapidly becoming one of my favorite projects, ultimately uncategorizable and beholden to no particular noise subsection but instead incredibly well-versed in a multitude of genres and ambitious enough to marry them in consistently unholy and ritualistic cacophonies.  NITA orchestrator Alocer Christus is a master at blending and layering sounds while infecting them with raw emotion, and "People For the Ethical Treatment of Abominations" stands as testament to his increasing reach and vision within the standard confines of noise.  Crackling electronics and tormented drones insinuate themselves into a mixture of voice recordings and samples, creating something both strangely beautiful and sickeningly eerie, a sort of Lynchian approach to the minimal work of Arvo Part or a more ragged version of Hermann Nitsch.  Incredibly impressive soundscaping from a project that just keeps surpassing itself.
Altar Of Waste is honored to send out another missive from the endless growing black, a transmission from the ghostly void and the voices choking beneath the dirt.  Rot and decay, ascension and transcendence.  The work continues.
Packaged in a DVD case in a limited edition of 15 hand-numbered copies.  $10 ppd. in the United States, $22 rest of world.