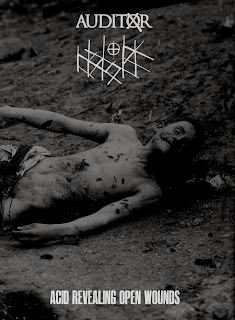 Crumbling and bloated slow-motion metallized horror from Chicago's Auditor and Venowl, turning in an agonized studio collaboration that sets a new standard for "doom."  Venowl's hyper-distorted sonic waste marries perfectly to the Auditor's electronic terrorism, creating an unholy assemblage of sound that vomits hell out onto the earth without sacrificing a sort of ghostly aura of subconscious beauty.   There is a majesty to the two massive tracks here, something heavenly and expansive buried beneath mound after mound of rot and ugliness.  Imagine Khanate on LSD locked in a room with Merzbow and you'll get a good idea of what you're dealing with here-sheer and unadulterated brutally, executed masterfully.
Altar Of Waste is psyched to bring this to light once more.  Originally self-released by the artists in a single disc unmixed/unmastered edition of 15 handmade copies, Auditor and Venowl have been kind enough to give AOW a mixed/mastered and expanded version of their intense union.  The second disc contains a live collaborative performance captured in Chicago last July and an unreleased punisher from Venowl.  You will not emerge unscathed!
Packaged in a DVD case with an OBI strip in a limited edition of 30 hand-numbered copies.  $15 ppd. in the United States, $27 rest of world. 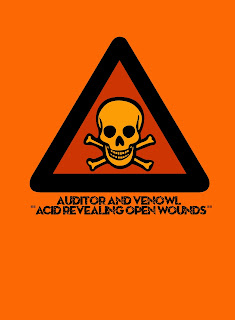 Also available in a super-limited four disc "Die Hard" version, available through Altar Of Waste only!  The "Die Hard" version contains the original two discs, plus the unmixed/unmastered version on a third.  The fourth disc contains two of my own compositions using audio from the Venauditor collaboration, entitled "Bleak Inferno."  A sort of meeting point between the Auditor, Venowl, HNW and over-the-top death metal conventions, a blooming flower of distorted disgust and numbing, pummeling electronics.  The "Die Hard" edition features totally different artwork in a twin volume DVD case and is limited to a scant 5 hand-numbered copies.  This one is for the AOW loyalists!  $30 ppd. in the United States, $42 rest of world.