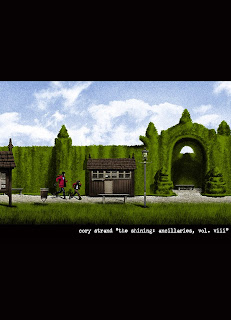 The eight and penultimate volume in a series of recordings utilizing Wendy Carlos' unused compositions for Stanley Kubrick's The Shining.  I've done a lot of work with this soundtrack in the past, and this series represents a deeper exploration of Carlos' original vision for the film score, a bizarre parade of tonal environments and shrieking ghostly ululations that for whatever reason did not fit Kubrick's vision.  The music showcased on these volumes is material that would not necessarily work as albums proper-they are individual manipulations and constructions intended to highlight specific compositions as opposed to the thematic whole of an album.  As such, they are glimpses of records that might have been, or perhaps are in an alternate realm.
"Volume VIII" is a towering 6 CD set that marks the end of my work with Wendy Carlos' magnificent soundtrack.  At this point I have worked with everything I have access to (some tracks more than once) and will let this stand as the near-final piece of my carefully crafted auditory puzzle; until i come across the bootleg 2CD set of the OST released by Overlook Productions (and if you can help me with this, please get in touch with me) my work with the score proper is now complete.  The six CDs that make up "Volume VIII" take the listener deep into thick and unctuous headspaces, terror drones and wisps of murderous suggestion that ultimately lead to discomfort and severe disorientation.  The final volume, utilizing the OST to the fantastic documentary Room 237, will be out late this year or early next.
Packaged in a twin DVD case in a limited edition of 5 hand-numbered copies.  $30 ppd. in the United States, $42 rest of world.

ORDER HERE: www.altarofwasterecords.storenvy.com
Posted by Author at 9:50 AM