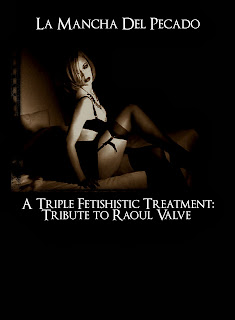 Staggering new drone compendium from La Mancha Del Pecado, a frightening excursion into the deepest realms of the glisteningly erotic illuminating the horrid emptiness lurking behind boudoir noir.  Utilizing the eclectic soundtracks composed by Raoul Valve for three Andrew Blake films, "A Triple Fetishistic Treatment" sees La Mancha Del Pecado transforming the vaguely banal and unobtrusive into blackest night clouds of uncertainty and self-doubt.  The artistry in Blake's films reveals layers of suggestion not oft found in standard gonzo pornography, teases of themes and relationships oft left unexplored by the mainstream in favor of quick release and exhaustive bouts of fucking.  La Mancha Del Pecado takes that artistry and rips it open, exposing both the emptiness at its heart and the lurid technicolor expanse of the images it approximates.
I am quite honored to say that the band's approach to this recording was inspired by me and my own re-envisioned soundtrack works, an attempt to draw out something new and visceral by immolating the source.  The three massive pieces here are absolute onslaughts of cathartic amplifier meltdown hyperdrone, going well beyond the void into a realm of erotic punishments and haunting psychological complexities.
Packaged in a DVD case in a limited edition of 15 hand-numbered copies.  $18 ppd. in the United States, $30 rest of world.

ORDER HERE: www.altarofwasterecords.storenvy.com
Posted by Author at 10:34 AM