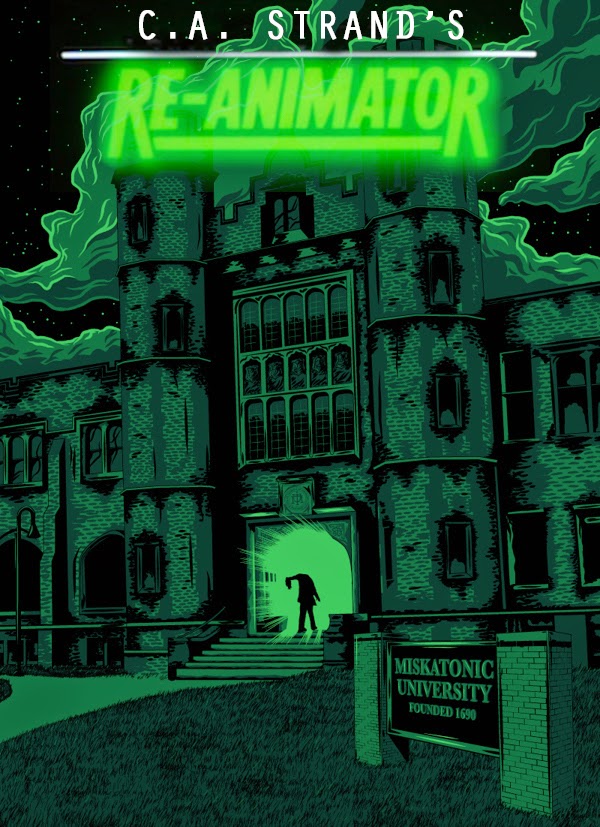 Massive, epochal reworking to the OST of one of my favorite films of all time, "Re-Animator."  Directed by Stuart Gordon and based off the H.P. Lovecraft story, the film is a dizzying tour-de-force of over the top hyper-gore splatter, nervous histrionics, and some pitch black morbid comedy; its willingness to push beyond the genre confines of horror and wallow in its own ridiculousness has rightfully bestowed upon it a cult film status, as well as being (at least to me) one of the best cinematic Lovecraft adaptations.  While actor Jeffrey Combs is perhaps most deservedly associated with the film, Richard Band's bombastic score is no less deserving of enthusiasm.  Like John Williams ingested by the rings of Saturn, Band's work is gleefully zany without sacrificing menace or intensity.  In working with the "Re-Animator" soundtrack, i've attempted to play up that over the top tendency and create an immersive blast of seering, psychedelic wallcraft.  Textures and tones abound in a sea of colorful blood rainbow fury, a torrent of tongue-in-cheek bile to chart your ascension beyond the stars, beyond death.  This is some of my most insane wall work to date-tons of change and little stasis but all severity!
Packaged as six separate albums (the final volume is a 2-disc double album), each with their own individual artwork, and housed inside a radioactive green cardboard box with paste-on covers and an informational insert.  I think it looks really cool.  Released in a limited edition of 5 hand-numbered copies.  $60 ppd. in the United States, $73 rest of world.