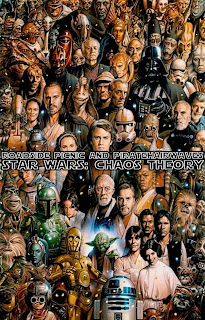 PLEASE NOTE: This is currently being offered as a PREORDER.  The first tape of the set has been sent out for manufacture; I am offering this as a preorder to help offset the cost of manufacturing the second cassette.  I expect the entire set to be finished and shipping towards the end of June/early July.

Roadside Picnic's trilogy of AOW releases sees completion with this, an incredible work of cinematic sound manipulation and transformative sound art, created in collaboration with Piratehairwaves.  "Star Wars: Chaos Theory" is the audio component of an experimental film/gallery installation created by RP's Justin Wiggan and Piratehairwaves; the film is all six episodes of the "Star Wars" saga layered on top of one another and played as one film.  The result is deliriously psychedelic and at times hauntingly beautiful; for those interested, I have included a link that gives a deeper explanation of the project and its goals.
Justin and I back and forthed for awhile about the best way to present this release; we decided on a double cassette set, with artwork drawn from the entirety of the "Star Wars" saga.  for me, this release is less about "Star Wars" than it is about the wondrous possibilities inherent in the art of manipulation and transformation; in this regard, this release is very close to the heart of my mission with Altar Of Waste.  I am very happy to be releasing this!
Released in a limited edition of 20 hand-numbered copies, on colored cassettes.  $20 ppd. in the United States, $33 rest of world.

ORDER HERE: www.altarofwasterecords.storenvy.com
Posted by Author at 8:31 AM