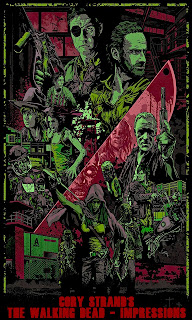 PLEASE NOTE: This is currently being offered as a PREORDER to help offset the cost of manufacture.  I expect the sets to be in stock and shipping mid-September.

This one has been in the works for well over a year!  When i decided i was going to start doing tapes through AOW, this was the first project, suggested to me by Gina (The Walking Dead is her favorite television show and she had been after me for awhile to do a record based on it.)  Fast forward to the now and the set is finally complete, a collaborative effort between Gina and me.  The music is by me, seven different compositions crafted from audio elements of both The Walking Dead's soundtrack (by Bear McCreary) and the show itself, showcasing a variety of sounds: some pieces are extreme HNW, some are empty death ambient, some are Hecker-style ambient roars, and some are lovely, yearningly melodic drones.  It's a very sonically varied set, hopefully capturing fleeting moments of violent atmospheres and eerie calm and crushing sadness as in the series.  Gina's contribution comes in the form of two beautiful lino cut prints, one a large slipcase housing the entire set, the second a smaller and more obscure piece of imagery relating to the show, housed inside the box as a sort of "insert" (kudos to you if you can place where the image is from!)  All three tapes are contained in a large clamshell box, with full colour artwork (different from Gina's lino cut prints).  This one has been a labor of love from both of us, and I am very pleased to finally offer it up.
Released in a limited edition of 10 hand-numbered copies.  $35 ppd. in the United States, $48 rest of world.