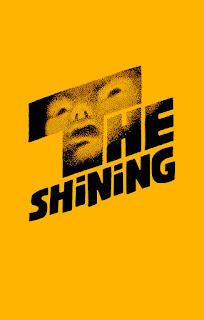 PLEASE NOTE: This is currently being offered as a preorder to help offset the cost of manufacturing the tapes.  I expect the tapes to be in hand and shipping in 3-4 weeks.

A new installment in my ongoing "The Shining: Ancillaries" series, this time going way back to one of the most obvious objects associated with the film: its "original" soundtrack, released on vinyl before all the music clearances and legalities went through; the records were recalled very shortly after release and are incredibly rare.  Today, this LP goes for an insane amount of money and is bootlegged to death, but even the bootlegs are so scarce that I've never run across one in 20-some years of record hunting/collecting.
This version of the soundtrack features eight tracks: some of Wendy Carlos and Rachel Elkind's synth wizardry, a bunch of Kubrick's beloved and dissonant atonal classical music, and a shmaltzy "lounge" type track.  I've taken these pieces and reworked them into severely deep gulfs of empty, droning death ambient, resulting in 94 minutes of sheer existential dread and encroaching horror.  This is one of the best installments in the "Ancillaries" series thus far; the drones are seriously DEEP and I highly recommend headphones for this one.  You'll feel like you've been here before.
Released as a C94 (mustard yellow tapes) with full colour outer and inner artwork, in a limited edition of 10 hand-numbered copies.  $10 ppd. in the United States, $23 rest of world.