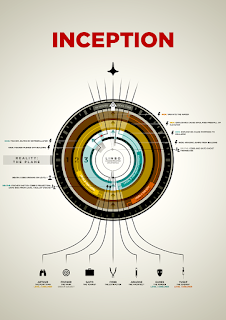 My long in the works reinterpretation of Hans Zimmer's devastating (and seriously heavy) score for Christopher Nolan's equally devastating metaphysical masterpiece Inception, a deep exploration into the philosophical and violent undercurrents of the film.  This score just leveled me when i saw the film in the theater years ago; it was gargantuan, engulfing, droning, and forebodingly intense.  In working with the score, I've sought to retain the density and bombast without sacrificing the emotional core of Zimmer's compositions; the result is an incredible, towering set of glacial, frigid, detached drone and some seriously thick, vomiting HNW sludge.  The rework is split into twelve discs of drone and twelve discs of HNW, with an HNW "Totality" recording of the entire film's audio track on DVD-R.  I'm very proud of the work here.
Packaged in twelve double disc DVD cases and one single disc DVD case (the "Totality" recording), each with their own artwork utilizing some of my favorite images and ephemera from the film.  Released in a limited edition of 5 hand-numbered copies.  $175 ppd. in the United States, $183 rest of world.