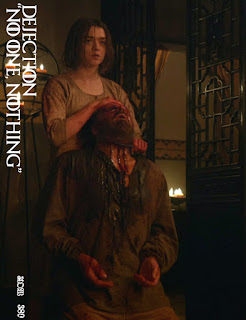 Another new cassette in Dejection's ongoing Game Of Thrones series.  "No One, Nothing" works of off Arya Stark's training under the doctrines of the Many-Faced God, as well as her revenge against Meryn Trant (possibly one of the most brutally violent scenes of murder in television-absolutely amazing.)
This cassette features a crushing HNW/synth composition on the A-side and a very murked out, dense and grey slab of ANW on the B-side.  One of my heaviest recordings, for sure.
Released in a limited edition of 10 hand-numbered copies.  $10 ppd. in the United States, $26 rest of world.

ORDER HERE: www.altarofwasterecords.storenvy.com
Posted by Author at 7:46 AM