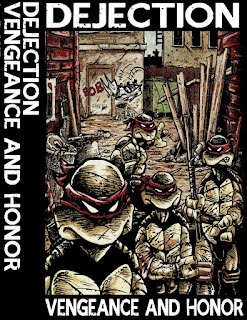 Part of Dejection's ongoing "TMNT" series of recordings; these tapes are intended to serve as soundtracks to specific issues of the comic series, or as musical evocations of certain situations and atmospheres present in the comics.
"Vengeance and Honor" is based on the inaugural issue of TMNT, where the Turtles face their mortal enemy Oroku Saki (the Shredder.)  The two pieces are are some dense and minimalist, heavy ANW.  Murky and thick.
Released in a limited edition of 10 hand-numbered copies.  $8 ppd. in the United States, $24 rest of world.

ORDER HERE: www.altarofwasterecords.storenvy.com
Posted by Author at 7:16 AM