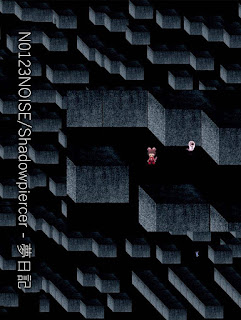 Crushing HNW split release from these two AOW faves in honor of the game "Yume Nikki."  Each project turns in some truly massive, gnawing HNW that will easily satisfy fans of either project.  An incredible split that I knew I had to release on AOW the moment I heard it.
Indigo blue cassettes, with a smattering of random copies on translucent blue cassettes.  Released in a limited edition of 15 hand-numbered copies.  $8 ppd. in the United States, $24 rest of world.
The cassette can be streamed in its entirety here:

ORDER HERE: www.altarofwasterecords.storenvy.com
Posted by Author at 8:53 AM