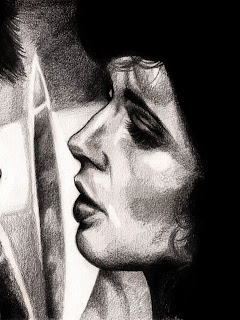 Sean E. Matzus' contribution to the "Blue Velvet" series finds him creating two massive, engulfing slabs of drifting HNW emptiness par excellence, a distant and oppressive tower of rumble and quake that threatens to overwhelm at any moment but never quite does, content to hang in a tense and calculated pocket of spacesound.  There is a sense of ambience here, but it is subordinate to the all-consuming and relentless drive of ANW-style glacial stagnancy, a forcible enmiring of the listener into the hidden recesses of sexual violence and overt friendliness that comprise Blue Velvet's diegesis.  Just crushing, in every way.
Packaged in a fold over cover in a clear plastic bag, released in an edition of 10 hand-numbered copies.  $7 ppd. in the United States, $20 rest of world.

ORDER HERE: www.altarofwasterecords.storenvy.com
Posted by Author at 8:07 AM