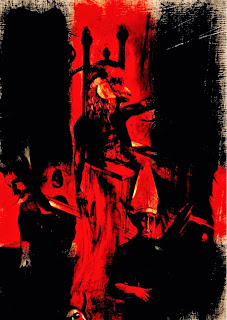 A repress of my long out of print (and oft requested) "Reign In Drone" set from 2013.  This version comes with all new artwork, but beyond that, everything is the same-no bonus tracks or anything (and this version does not include the Slayer bootlegs that accompanied the first pressing, hence the lower price).  Only order if a) you don't have this already; b) you are an AOW completist and want the new artwork.  Here's the info about this recording:

The second of my tributes to Jeff Hanneman, "Reign In Drone" is a monumental ambient rework of Slayer's classic "Reign In Blood."  I feel like people will either love this or hate it, but for me, I think it's an incredibly massive statement that plays off the original album's severity but in an entirely different format.  In a certain way, "Reign In Blood" was all about intensity and saturation, its short runtime doing little to indicate how exhausting and caustic of a record it actually was.  It doesn't matter how long it goes on-it just has to work.
This set will attempt to wipe you out, but it will also attempt to wrap you in revelry, a celebration of one of metal's most gifted and recognizably idiosyncratic rifflords.  Jeff is gone but not forgotten.  Go for the fucking throat and never, ever compromise.
Packaged in a twin volume DVD case in a limited edition of 5 hand-numbered copies.  No trades on this one please, as it was a beast to construct.