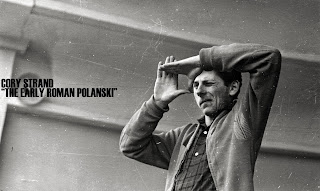 Another large scale collection of "Totality" recordings centered around the work of another of my favorite directors, this time exploring the "early period" of auteristic pariah Roman Polanski.  Polanski's works speak to an omnipresent threat of darkness and disorder leveled against existence and modernity, highlighting the twin dangers of solipsism and human arrogance.  Though he has done magnificent work across the entirety of his lengthy career, for this set i have decided to focus on seven of Polanski's early features, culminating with 1974's legendary Chinatown.  The seven reworks here all head into some severe and bleak HNW territory, a brutal and texturally varied tour through psychedelic sound structures and imaginary towers of continuous psychological decline.  Films included: Knife in The Water, Repulsion, Cul-De-Sac, The Fearless Vampire Killers, Rosemary's Baby, Macbeth, and Chinatown.
Packaged as a seven album set, with each recording packaged separately in a DVD case with their own artwork (much like my "No One Ever Changes: The Films of Todd Solondz" set).  Released in a limited edition of 5 hand-numbered copies.  $95 ppd. in the United States, $108 rest of world.