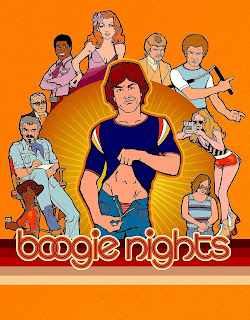 Huge rework of both volumes of the soundtrack for P.T. Anderson's magnificent film Boogie Nights.  To say this film ha been an influence on me is an understatement; it is simply one of my very favorite films of all time, and one of the films that changed the way I looked at cinema, inspiring me to make it the focus of my academic life.  I saw this in the theaters in 1997, on a whim, without knowing anything about the film or its director.  I came out of the theater changed, convinced of the power of cinema to move me emotionally and open me up to experiences with art that I had not had prior.  The film is a stunning panorama of image and sound, comparable to the best work of Martin Scorsese, but existing in its own thematic universe.  There is not a single wasted moment in this film, no image that isn't glorious, no performance that isn't outstanding (Mark Wahlberg's performance as Dirk still gives me goosebumps every time i watch this film, and Burt Reynolds has never been better as a Jamie Gillis-type producer of pornography.)  The soundtrack, comprised of disco and rock hits from the 1970s and early 1980s, is a masterful example of curation (and a lot of fun, to boot.)  It's a stunner, and I've wanted to do this rework for a long time.
The set is made up of 27 discs of frigid, melancholic ambient crafted from the film's OST, with an HNW "Totality" recording of the entire film's audio track on DVD-R.  Each disc is housed in a black sleeve and accompanied by a double-sided full frame art card utilizing my favorite images from the film, with each card and disc then housed in a clear plastic bag; the entire set is housed inside a wooden box, hand-lettered by me, with an additional info card (the presentation is very similar to my large "The Virgin Suicides: Complete" set.)  All of the screen grabs were done by me personally from a blu-ray transfer of the film.
Released in a limited edition of 3 hand-numbered copies.  $275 ppd. in the United States, $291 rest of world.

ORDER HERE: www.altarofwasterecords.storenvy.com
Posted by Author at 6:43 AM