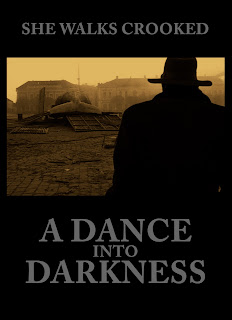 Very pleased to be releasing this new three-disc set from She Walks Crooked.  "A Dance Into Darkness" is inspired by Bela Tarr's beautiful, glacial, and unnerving film Werckmeister Harmonies.  I don't want to ruin anything for anyone who has not seen it, but Tarr is a singular filmmaker whose only real contemporary is Tarkovsky.  SWC's work here is thoughtfully composed blasts of shifting, dense, crushing and LOUD HNW, echoing the psychic detritus of the film.  Masterful stuff as always from SWC, and sure to disappear quickly.
Released in a DVD case in a limited edition of 10 hand-numbered copies.  $20 ppd. in the United States, $36 rest of world.

ORDER HERE: www.altarofwasterecords.storenvy.com
Posted by Author at 7:05 AM