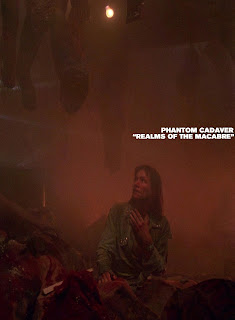 Phantom Cadaver returns to AOW with a loose continuation of the work begun on the project's last AOW release, "Maze Of Morbidity."  "Realms Of The Macabre" continues down that path, pulling the listener further into dark areas of depravity and over-the-top madness.  This release is epic in every sense of the word, comprised of a truly destructive 80 minute wall that progresses through a number of distinct movements without ever sounding like anything other than a composed whole.  It's pretty much a descent into hell.  It is true wall horror for the HNW devotee, and again demonstrates why Phantom Cadaver deserves a place among the genre masters.  Gloriously, unbelieveably great stuff here, from one of the best in the field.
Packaged in a DVD case and released in a limited edition of 15 hand-numbered copies.  $10 ppd. in the United States, $26 rest of world.