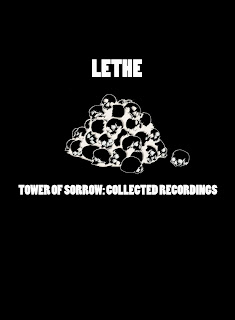 The second installment of a three volume reissue series collecting the majority of Lethe's digital recordings, "Tower Of Sorrow" focuses on synthesizer manipulation and heavily processed field recordings across the span of three incredibly bleak and despondent albums: "Mulonthanain," "Ruined Epoch," and "Nullification."  "Mulonthanain" is the most immediately visceral of the three, with guitar and synth textures bludgeoned together into an HNW-influenced approximation of Lovecraftian atmosphere and glacial progression.  "Ruined Epoch" is one of my favorite Lethe recordings, an expansive and chillingly empty catacomb of drones created from field recordings of wind.  A pustulent ooze of decay and disfiguration bleeds across the album's three massive tracks, culminating in the frigid knifelike eviscerations of "This Is All Around You."  "Nullification" works off the same principle source but opens things up to an embrace of momentum and features one of my first attempts at drum sampling and looping, employing one of the most recognizable fills in rock history.
Altar Of Waste is pleased to grant physical form to these early pieces, a truly expansive set of headphone intensity for twilight nights under a brown and rusted moon.  The sickly pallor drips from the sky like broken wax, suffocating those who writhe amongst the dirt.
Packaged in a DVD case with hyper-minimalist artwork by Gina Newman in a limited edition of 5 hand-numbered copies.  $18 ppd. in the United States, $30 rest of world.