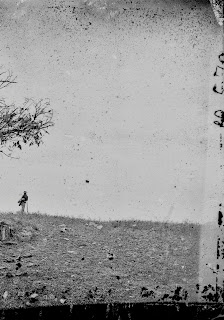 Dense and nullifying new work from the history obsessed HNW entity known as Anonymous, a continuation of the work begun on 2012's massive "Gettysburg" set, which made my ten best albums of the year and set a new benchmark for bleak and suffocating tarlike HNW that offered virtually no respite.  "Antietam" ups the ante considerably in terms of both theme and music, with the artist offering up a crushing six album set focused on the extremely bloody battle of Antietam, a clash that choked soil with blood and caused streams and brooks to flow crimson and lurid, easily eclipsing the tragic loss of life seen at Gettysburg; the walls here serve up a similarly brutal atmosphere rife with torrents of broken and crumbling distortion drowning beneath throbbing stagnant bass textures, a paean to the terrible monotony of a nation's bloodlust towards itself.
The ultimate horror of war and the utter waste of human life are illustrated perfectly across the oppressive span of "Antietam," a march through American history's saddest hour that reconciles the absolute and necessary nihilism of combat with the stark beauty of the country's haunted love affair with its own torrid nostalgiah.  Rendered in shades of grey and inked with the black constancy of blood, Anonymous have crafted another severe masterwork, an overload of sonic intensity and a stunning vision of scattered viscera and nationalistic egotism.
Packaged in a twin DVD case in a limited edition of 15 hand-numbered copies.  Also includes a booklet of accompanying photos and text illuminating the theme of the record (the booklets are made to order due to expense-full colour printing and hand-bound, so please allow a little extra shipping time after ordering.)  $35 ppd. in the United States, $47 rest of world.