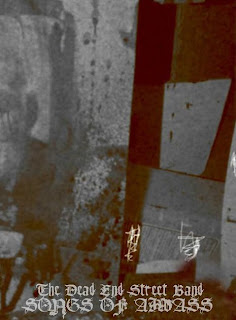 A cosmic slab of psychedelic horror drone from The Dead End Street Band, attaining a nightmarish atmosphere of wasted magickal ritual whilst basking in the presence of unnamed entities from beyond the stars.  The gravitational pull of occultic concepts gives way to oozing oceans of burbling synth damage, like Space Machine as filtered through a heady opium haze and a laudanum bath, a headtrip as dark and psychotic as the worlds of David Lynch but somehow rooted in a frightening and misunderstood historical reality proffered by Aleister Crowley and the manipulation of forces existing on the fringes of nature and the tangible material world.  The mind must open, the eye must crack.  The flesh must bleed and the sky must quake.  There are dense and forgotten pockets of surreality weaved into the fabric of our world, waiting to be excavated and spun into the catatonic lull of our dreams and visions.  "Songs Of Aiwass" is an incredible journey through spectral lore and a lurid flowering of drone and rotted psychedelia.
Altar Of Waste is beyond pleased to release this epic recording of inner quests and unintelligible ululations from the black beyond of space and nothingness.  The cosmos drifts, the stars die out, the galaxies fold in on themselves and become nothing more than memories stretched across gulfs of time.  This sounds like the void collapsing.
Packaged in a DVD case in a limited edition of 20 hand-numbered copies.  $10 ppd. in the United States, $22 rest of world.