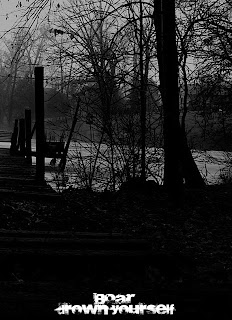 Re-release of this punishing descent into hopelessness from Boar, originally released by Breaching Static last year.  This is an eviscerating wallow through the most despondent of human emotions, a maelstrom of psychological devastation reveling in a hatred for the self and the utter irrelevance of all of society.  Gnawing contemplation quickly gives way to a fracturing of reality and a breaking of the consciousness, setting the psyche alight in the empty cosmos.  The terror of meaninglessness takes your hand and guides you towards the shores of oblivion, growing colder and clammier by the second.  This touch is inhuman, this place unreal.  There is no now, there is no action.  There is only the end and the embrace.  Submit to despair and breathe deep from these waters of defeat.  Suicide is not an escape but a recognition of the inevitable.
Altar Of Waste is thrilled to present this severe piece of sound sculpture in preparation for our upcoming collaboration with Boar.  "Drown Yourself" is a masterful construction of HNW, PE, and drone, fully reaching into every aspect of the genres but belonging squarely to none of them.  The end result is a work awash in torment and depression, hollowed and carved from the meaninglessness.  Packaged in a DVD case in a limited edition of 20 hand-numbered copies, with a wholly destructive new bonus track.  $10 ppd. in the United States, $18 rest of world.