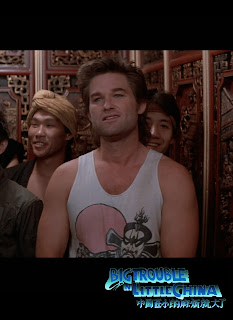 Another John Carpenter rework, this time paying homage to one of his most undersung (and perhaps misunderstood) films, the delerious/hilarious and grossly imaginative action send-up Big Trouble In Little China.  Eschewing the seriousness of some of his earlier work, Big Trouble In Little China found Carpenter having a blast with both the film and its soundtrack, turning in a suite of songs that was more traditionally rock-oriented than anything he'd done prior.  The film, too, reeked of American rock and roll swagger, with Kurt Russell hammily stepping into the iconic shoes of Hollywood's eternal cowboy John Wayne, assembling in Jack Burton a character both triumphant and deplorable in his affection for a certain sort of patriotic ideal.  Carpenter married that staunch ego to the subconscious and mismaligned mysticism of the Far Eastern martial arts traditions, emerging with a wild, colorful, and highly enjoyable film that has attained deserved status as a true cult classic.  In working with this soundtrack I tried to have as much fun as Carpenter must have; strangely enough, the set stands as some of my most brutal and bludgeoning yet glaringly melodic walled noise to date.  Enjoy.

Packaged in a DVD case in a limited edition of 5 hand-numbered copies.  $25 ppd. in the United States, $37 rest of world.