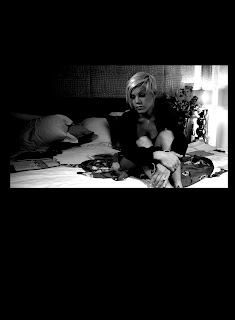 The second entry in my loose series of recordings begun with the "Punishment Will Be Severe" album recently released on Occult Supremacy, "Worry And Ruin" presents a washed out and minimalistic journey through the musical landscape of pop goddess Pink, attempting to mine the wilting depression and caustic self-doubt hinted at in the source tracks.  Pink's self-built reputation as an underdog and outsider on the fringes of modern rock is betrayed by her success; in some ways, her songs virtually beg the listener to dismiss them, to not pay any attention to the ironically defeatist anthems sung by the ragged and vaguely punky girl who never really thought she'd be in the spotlight.  A yearning hides in between the obviousness, brashness as a concealment for years of wretched personal sorrows.
I think these songs are saying something ultimately more funereal than empowering.  The true message lies in the drawn out breaths in the recesses of the songs, the shivering lines where the voice strains to tear the sky.  You can sing along if you think you really know the words.

Packaged in a DVD case in a limited edition of 5 hand-numbered copies.  $15 ppd. in the United States, $27 rest of world.